A Journey of Possibility 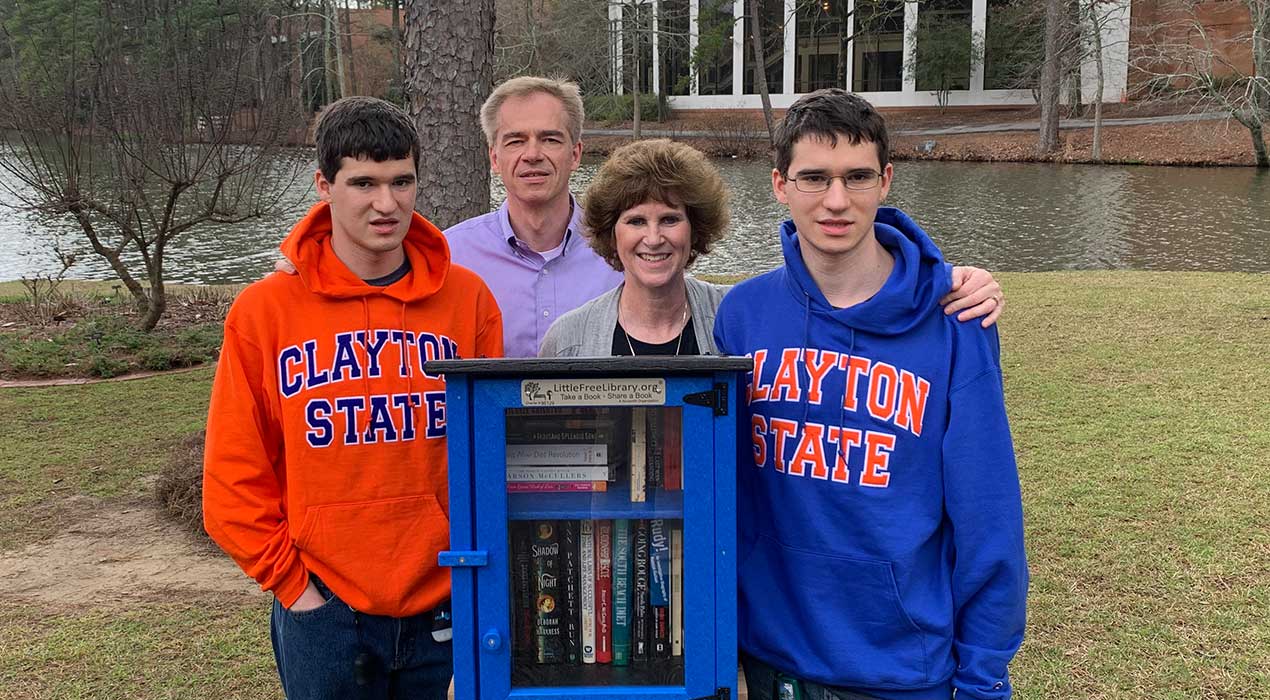 If you ask Kirk and Scott Lawton what it is like to have autism, they’ll tell you it’s a mixed blessing. The tough part—staying focused.

“We both struggle with obsessions and compulsions, which compete for our attention in class and while we are studying,” Kirk says.

But there are times when what seems like a challenge for the twin brothers and Clayton State students can become an unexpected gift. One such time came about two years ago. Kirk and Scott were hired as volunteers in the university’s library to gain some hands-on experience and learn how libraries operate.

The university library holds many books and every so often a book can come up missing. One such book had gone missing since 2011 and eventually had been marked permanently lost by the library staff. But when the siblings were assigned the meticulous task of verifying the order of the library’s books on the shelves, the job tapped into their passion for books and their ability to get super-focused on something that interests them.

Quite early in the process of filing through books, making sure the call numbers on the book spines were in numeric order, the twins happened upon the lost book.

“It was exciting for everyone to find a book that had been lost for so long,” said Kara Mullen, a former librarian at Clayton State and their supervisor. “I know this opportunity gave them something to look forward to and gave them a sense of accomplishment when they found a book out of order or in need of repair.”

While some may assume living with autism would be daunting, Kirk and Scott, who are both pursuing an Associate of Science degree in Integrative Studies, are thriving at Clayton State and discovering who they are and what impact they want to make in their community.

When Kirk and Scott were just two years old, their parents noticed that neither child was talking. Concerned, Celia Lawton and her husband, Frank, took the children to a pediatrician.

“She referred us to an organization called Babies Can’t Wait, which conducted evaluations for both,” Celia remembered. “At the end of those evaluations, we were informed that they most likely had Autism Spectrum Disorder.”

Autism is a complex, lifelong developmental disability that typically appears during early childhood and can impact a person’s social skills, communication, relationships and self-regulation.

Additional evaluations conducted by other medical professionals confirmed the diagnosis. It was a lot to process for the family.

“Besides coming to terms with the realization that our children were not developing typically, one of the hardest parts of receiving the diagnoses was the feeling of being completely overwhelmed with the immediate need to arrange early intervention services for them, such as appointments with a developmental pediatrician, appointments with a child psychologist, special education preschool, speech therapy, and occupational therapy,” Celia recalled.

Coincidentally, Celia said she and her husband were a bit familiar with autism since one of Frank’s co-workers had a child who was diagnosed with the disorder nine months before. They witnessed what that family had to go through, including obtaining the services and therapies needed for their child.

Armed with the knowledge of their twins’ condition, the couple enrolled Kirk and Scott in their county’s special education preschool and took them to weekly therapy appointments. The boys also participated in a number of programs offered by a local non-profit organization called FOCUS. FOCUS organizes numerous programs for individuals with a variety of disabilities.

What was most important to Celia and her husband was to make sure that their children were aware and educated about autism.

“We never tried to keep their diagnosis hidden from them, nor did we try to hide it from other people,” Celia said.

While some parents may fear their children will be treated differently if people know about their autism, the Lawtons chose to make sure their sons were informed so they can educate others and advocate for themselves.

“We felt that it was pretty obvious to detect that Kirk and Scott did not have typical behaviors, so if people knew why, they would have a better understanding of how to interact with them,” Celia said.

Kirk and Scott’s relationship with Dr. Samuel Maddox, a psychologist and professor at Clayton State, during their elementary and high school years also helped them develop their social skills and excel in their studies, including earning a regular high school diploma.

Maddox met the Lawton family in 2006 through Floortime Atlanta, which serves children with development challenges including autism. By establishing a supportive relationship with the brothers, he helped Kirk and Scott acknowledge their strengths, practice how to stay calm under stress, and advocate for the support and resources they needed so the two could be as independent as possible heading into adulthood.

“What I was first struck by with the siblings was that they were highly intelligent and had exceptional verbal skills, but had struggles remaining calm which would make others sometimes overlook their gifts,” Maddox said.

It was through Dr. Maddox that the siblings learned about Clayton State University. He put them in touch with the Disability Resource Center, and, after a campus tour and sitting in on a class session, Kirk and Scott were hooked.

“It was a whole new world to me. What I loved the most was how beautiful the campus was,” Kirk said. “I like all the lakes that surround the buildings, and the swan was my favorite thing.”

Scott appreciated moving from a single building to take all of his classes to being able to move around campus and take classes in various settings.

“Kirk and I went to a large high school, but all our classes were in the same building, with the softball field and the football field behind it,” Scott said. “I was impressed with the number and variety of buildings at Clayton State, and I looked forward to the fact that I would not have to take all my classes in one, single building.”

After Kirk and Scott were admitted to Clayton State, they met with the staff at the Disability Resource Center.  The Center was especially helpful in getting both of them to be evaluated by the Regents Center for Learning Disorders at Georgia State University. The evaluations identified the brothers’ strengths and weaknesses, as well as offered recommendations for class accommodations, including permission to record classroom lectures, opportunity to take tests in the Disability Resource Center and the ability to have a personal classroom assistant.

Kirk and Scott also received academic coaching from the center’s director at the time, in addition to guidance from academic advisers from the Center for Advising and Retention to ensure they stay on track toward completing their degree.

“Each of them has provided Kirk and Scott with personalized attention and has helped them work through the process of selecting courses every semester, which has kept them on track toward the goal of obtaining their degrees,” Celia said. “In just about every respect, the Disability Resource Center staff has been extremely supportive of Kirk and Scott.”

Since being at Clayton State, the pair are leaving their mark on campus, both in and out of the classroom.

Kirk turned a presentation from a public speaking class about the benefits of a Little Free Library into an effort supported by the university library to construct the book-sharing box on campus. Scott created a stop-motion animation project called “Childhood Treasures” for his fall 2019 Digital Imaging class.

The short film was selected to be part of Clayton State’s student art exhibit at the Arts Clayton Gallery in Jonesboro, Georgia.

The brothers have also been able to strike up friendships with their peers, as well as their professors, classroom assistants and academic advisors who provide personalized attention to aid in their success.

One of their classmates who is a member of the Air Force Reserve at Dobbins Air Reserve Base in Marietta, Georgia, even arranged a personal tour of the military installation.

More than anything, the brothers feel that their experience at Clayton State has helped them become smarter and more mature. While their future is uncertain, they’re already looking at the possibility of earning their bachelor’s degrees at Clayton State or obtaining work skills through a vocational job-training program.

For their mother, the journey of autism is long, but fruitful.

“There are some “age-old” issues that continue to be a struggle for them,” Celia said. “At the same time, they have improved in many areas, and we are proud of the knowledge that they have obtained at Clayton State.”