Pinch set out to do what few of her friends have ever done. The goal was set. Journey from the top of the ridge, down to the stream, cross over the creek and reach the grassy landing in the woods. Along the way, she survived heavy rains and encountered dangerous predators such as snakes, dogs, birds, raccoons, cats and humans. Her counterparts will typically travel within a five-foot range in a two-week time period. Yet, in the same amount of time, Pinch travelled an impressive quarter-mile.

Pinch, an Eastern box turtle, was affectionately named by Dr. Diane Day, professor of biology in the College of Arts and Sciences. Day shared it was likely that as Pinch was growing, something had been wrapped around her such as plastic packaging from a six-pack of soda cans. This may have caused the “pinched” area on her shell.

Day’s interest in turtles started early on when she lived near a wooded area where she would find them and bring them home as a child. As an accomplished researcher, she has dedicated much of her investigation to the box turtle.

Like Pinch, Day is on her own journey—a mission to save the box turtles.

Turtles are one of the oldest reptile groups, more ancient than snakes or crocodilians, and many species are highly endangered. Box turtles, of the genus Terrapene carolina carolina, are native to North America and are known for their dome-shaped, carapace-patterned shells that are yellow and orange in color. They are not endangered, however the species is classified as vulnerable.

“I was fascinated with the fact that they carry their homes on their backs. They have been around for over 260 million years virtually unchanged,” Day says. “Which means they have the perfect form—or had the perfect form until humans came along. They are so great. They have changed so little over millions and millions of years.”

Partnering with the Southern Conservation Trust, a community land trust in Fayette County, Georgia, Day has spent nearly five years researching this protected species and how to preserve their population. 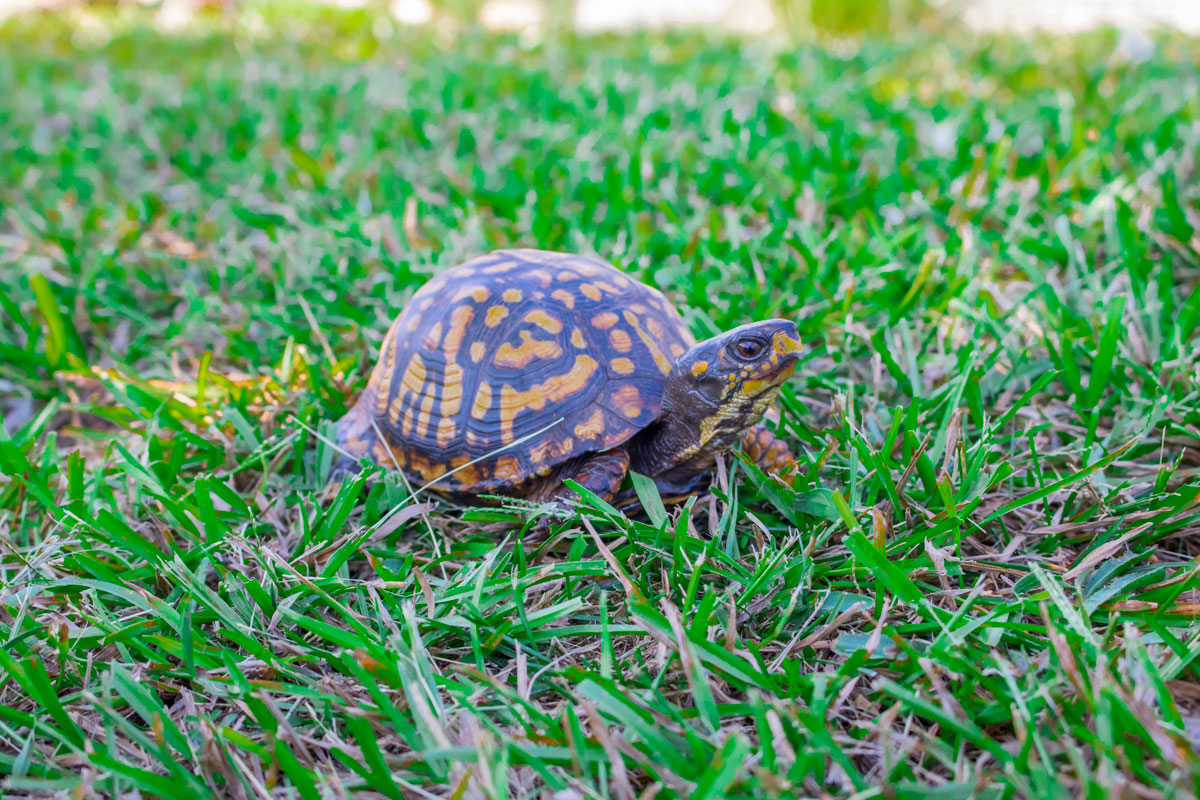 “I was fascinated with the fact that they carry their homes on their backs. They have been around for over 260 million years virtually unchanged.”

As an indicator species, box turtles have the ability to biomonitor their environments, a biological measure of environmental impact.

“Diseases typically don’t really bother them. They can survive infections that most animals can’t,” Day explains. “So they have a very good immune system. If they are disappearing in numbers then that means that other animals are probably disappearing as well.”

Working with her students, Day collects DNA to understand relationships between the turtles and to investigate why approximately 34 percent of the turtles collected have pitting on their shells. It is unclear what the reason for this is, whether it is a virus, a bacteria or a mutation.

To track the turtles, their shells are marked with a unique code so they can be distinguished from other turtles. Radio transmitters are also attached so researchers can find their exact GPS coordinates even if they are hibernating. Some have been tracked for up to eight years now.

Shaneil Johnson is also a self-proclaimed turtle enthusiast and biology major at Clayton State. She works with Day collecting and duplicating DNA to find relationships between the turtles. Johnson has dreams of pursuing her masters in biomedical sciences after graduation and eventually working in a forensics lab. She believes her experience researching the box turtles will contribute to her future success.

“I am learning a lot with this research,” says Johnson. “I didn’t really know about their home range or how you could tell they were related. I thought [their home range] would be just a small area. People think that turtles are so slow but they do travel a lot.”

Progress with each small step

In her efforts to preserve the box turtles, Day has also launched a head start program. Hatchlings are cared for and kept for two to three years until their shells are hard enough so that most predators can’t eat them. Then they are released in a two-phase process.

The soft release is where they are in a pen so they can become acclimated to the environment and then they are released into the wild. This helps to increase their chances for survival.

Day’s work to save the Eastern box turtle is far from finished, but as they say—slow and steady wins the race.