College students often sit and daydream about the day they will finally walk across the stage and accept their diploma. But to get there, students seek out academic advisors to guide them on their academic journey and propel them toward completing their degree.

Eric Tack, director of the Advising and Retention Center, makes every effort to create a supportive and engaging environment for students at Clayton State.

“For us it’s helping students not only just navigate through the curriculum, but understand the decisions that can be there for you within your curriculum,” says Tack.

Tack joined Clayton State in 2015 to lead efforts to improve student advisement on campus. The Boca Raton native developed an interest in the advising profession through his time as an orientation leader at the University of Florida. He also met his wife through orientation.

“I was highly involved undergraduate student,” Tack says. “And I realized that could work at a university and get students involved.”

It’s what led him to pursue advising over his degrees in public relations and political science. As an advisor at Oglethorpe University, he founded their Center for Academic Success and has brought that experience to Clayton State.

One of Tack’s goals for advising was to create a more holistic support system.

“We’ve already had a very strong focus on advising here at Clayton State,” Tack says. “We’ve provided this consistent place that students can go to…and the safety net of following up and intervening is kind of the ideal world for our students.”

Tack knows what impact advising can have on student achievement. As a student at the University of Florida, his experience with advising was less personal. With a student population averaging 52,000, Tack says there were just two advisors for his college.

“I didn’t know what I was missing,” he says. “I was fortunate enough to be able to navigate the process.”

Tack says faculty can help students merge academic goals with career aspirations. This type of mentoring supports the works of the Advising and Retention Center and creates a streamlined experience that keeps students on track.

“I think what we’ve done is move toward allowing faculty to do what they do best, which is start to step into these faculty mentoring roles,” Tack says. 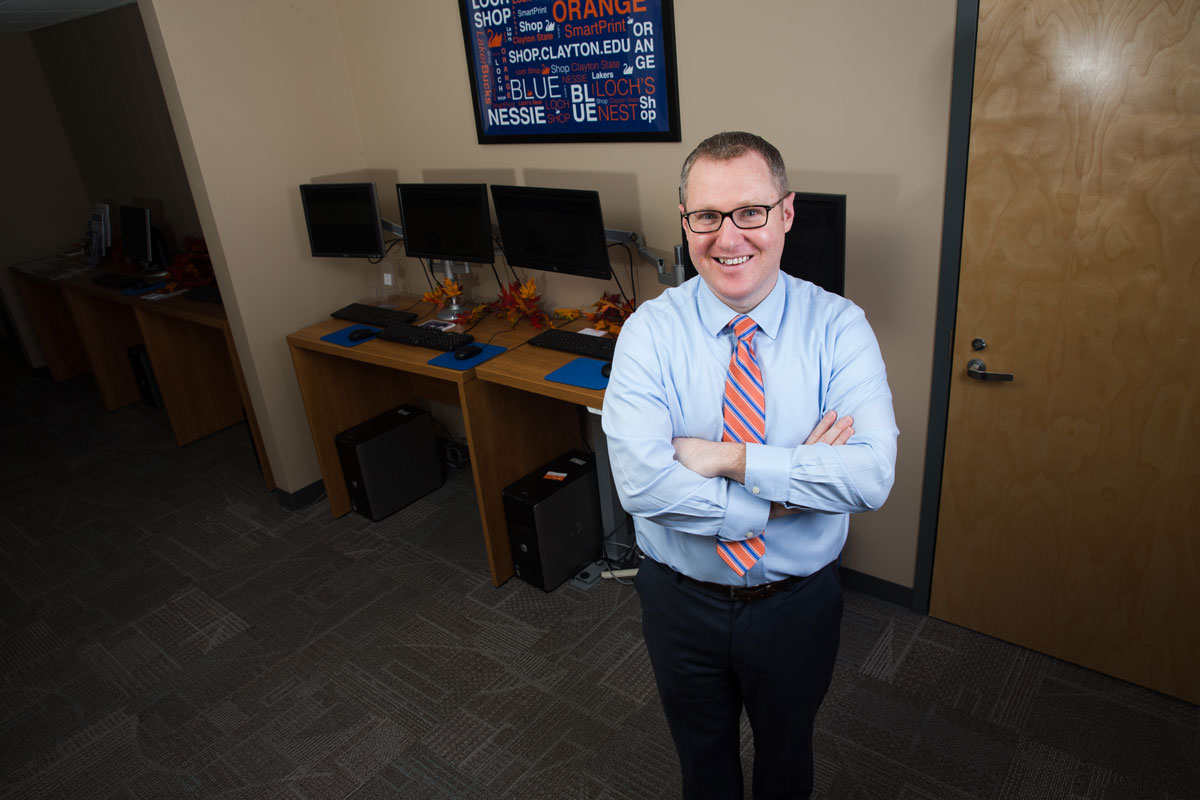 “We’ve provided this consistent place that students can go to…and the safety net of following up and intervening is kind of the ideal world for our students.”

Advisement has also shifted toward predictive analytics, whereby advisors use historical data that measures student success. By using the Student Success Collaborative software each advisor can analyze the progress of past students to quickly identify how current students are doing based on their academic performance.

“We take predictive analytics and marry them with these individual’s circumstances to best support what their trying to achieve,” says Tack.

Tack says that the work of helping students realize their dreams of obtaining a degree and heading into the workforce cannot be done alone.

The team at the Advising and Retention Center is made up of a group of people that share a common thread of wanting to support students based on who they are as individuals.

“It is not that you just centralize an advising team and magically things are going to happen,” Tack says. “We are extremely fortunate that we have highly knowledgeable, dedicated staff members that truly want our students to be successful.”