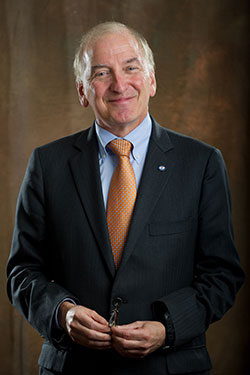 Upon being selected to serve as Clayton State University’s fourth president in February 2010, Dr. Thomas J. (Tim) Hynes, Jr. has built a foundation of transparency, strategic thinking, and collaboration in his approach to transforming higher education.

At the forefront of Dr. Hynes’s vision is Strategic Plan 2022, adopted by Clayton State in 2016 with a focus on becoming a national model for university-based community engagement and to equip students with the knowledge, skills, and motivations for learning and success.

For his efforts, Dr. Hynes has been highly-recognized for his leadership. He was named seven times by the Atlanta Business Chronicle as one of the Leaders in Atlanta Education. He has been named by Georgia Trend as one of the 100 Most Influential Georgians for 2015, 2016 and 2017 by James Magazine.

Before arriving at Clayton State, Dr. Hynes served as Provost and Vice President of Academic Affairs, and Professor of Mass Communication at the University of West Georgia. On two different occasions, he served as Acting President of that institution.

Prior to coming to Georgia in 1996, he was on the faculty at the University of Louisville for 18 years. There he served as the founding director of the University Debate Program, and in that role, led the program in the first six years to a National Debate Tournament (NDT) win, and to participate in the Final Four twice.

From 1990 to 1996, he served as Dean of the College of Arts and Sciences, the largest academic unit at that institution, and among other responsibilities, served as a member of the SACS reaffirmation steering committee and the NCAA accreditation committee. Together with the College of Education, Louisville was a charter member of the Holmes Group reform for the preparation of teachers.